Glovo Clubs: How the moon and a pineapple inspired a friendship

Who are we and what is our story?

F: I’m Francesca, a Data Analyst within Glovo’s Global Operations team for the past 1 and a half years, having relocated specifically for this role to the amazing Barcelona.

After a brief period of time living here, I was pleasantly surprised to see the amount of dogs per capita — I had been wanting to adopt one of my own for the longest time but the timing was never in my favour. Luckily, I had the chance of interacting with dogs from a very young age, as they were everywhere in the streets of my hometown in Romania — always super dirty and possibly full of fleas, but they always put a smile on my face!

After the first few weeks of the lockdown, it dawned on me that this was my cue to finally make my wish come true: I began looking at random announcements on the internet of folks offering dogs up for adoption. Unfortunately, there were hundreds of them… One caught my eye due to the urgency it presented: 10 puppies of 4 weeks had to be picked up that day from a small city 20 minutes away from where I lived. Otherwise, they would be shipped to a shelter the next day, as their mother could no longer produce milk and she was overall unwell. My next actions were almost instinctive, I knew I had to go and rescue at least one of them! Later on that day I was holding Luna in my arms 🙂

Now one year old, she’s sensitive, quite submissive to other dogs due to not attending mom-puppy school long enough, anxious eater due to hunger faced during the first few weeks of life, but very adaptable to different situations, super playful and loving humans — my confidant, my stress reliever and unlimited love source.

A: My name is Anne and I joined Glovo in January 2020 as a Data Scientist in the Content Discovery product team. Similar to Francesca, I relocated to Barcelona for Glovo and I did not know anybody in the city at arrival. I quickly met a lot of people given the vibrant atmosphere of the company, but when the pandemic forced us to stay home from mid-March onwards, it was a very difficult situation for me to feel quite alone.

We had a dog when I was a kid and I always wanted to adopt one as an adult but the conditions never seemed right because of my professional situation. But this time was different, it felt like the right moment to make this dream a reality. By the summer, I had found my own place and shortly after that stumbled upon a post on Instagram about a young female mummy dog looking for a home. It was a lot earlier than I had planned originally. But for some internal instinct, I made the move and now having a dog sharing my daily life really helps me with my wellbeing (also given that I am far away from my family): She is my entertainment manager, fitness coach, and cuddle buddy. I never feel alone since having her.

For me, it was very important to give a chance to an “underprivileged dog” which translated into an adult PPP (perro potencialmente peligroso) which requires more special permissions, licenses, and insurances. Shelters are full of them because of this. Also, given that I would be working from home and live in a rental apartment, I needed a dog with a calm character to focus on work and not get into fights with the neighbors. An adult dog would have already developed their character and be less of a surprise in that perspective after being vetted.

I named her Piña and she arrived in early September in Barcelona. She had a rather bad start to life as she was used as a breeding dog to sell “pure-breed” puppies to paying customers at a very young age. She got rescued from her previous owner for living in “inappropriate hygiene conditions” in a very small courtyard without ever leaving the premises — she was not even chipped. These initial living conditions translate into fear in terms of unknown objects at walks and an easy overload by information. She is not a dominant dog, very curious and in need of a lot of love. And she snores. A LOT (which Zoom meeting colleagues will confirm).

How did we meet?

A: At Glovo, we have various clubs which enable employees to connect with one another based on common interests, allowing us to connect on hobbies outside of work.

With no real pressure to contribute, anyone can choose between being an observer/consumer or be more proactive and initiate conversations and gatherings. Usually, somebody creates a new Slack channel and promotes it in company-wide groups, plus extra advertising is done by the People team to existing staff and new joiners help ensure all those interested know about its existence. In the case of the pets club, a new colleague had the idea around June 2020 of creating a pet channel that would connect animal lovers and owners to share a daily dose of fluff and make the hard days of the pandemic more bearable. Over time it also developed into a place to share relevant info related to pets such as sitters, vets, sterilization and adoption processes, Spanish regulation etc. 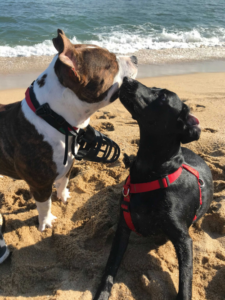 F: I came across the #glovo-pets-lovers channel and would post updates of Luna on the regular — always received love and positive vibes from all colleagues over there. One post, in particular, got Anne’s attention in October last year, and she asked us out for a puppy playdate — we were both a little worried as our dogs weren’t the most sociable towards their kind, but the bond was visible from the first beach meetup that you can see in the picture.

A: You can notice that the two four-pawed girls have quite a few things in common despite their different histories — as do their pawrents. They get along very well — probably also because Luna gives Piña lots of besitos all the time.

F & A: Since that first encounter, Luna and Piña have become very good friends, and so have their moms 🙂 We spent Christmas together as nobody was traveling due to the pandemic as well as the girls’ birthdays with puppy cakes, having weekly walks and overall a very good time in each other’s company.

Our recommendation for other companies is to provide employees with the infrastructure to be able to connect among them based on common passions and interests outside their job roles and increase well-feeling and ultimately company cohesion. Especially for expats who recently moved countries, this is a very good and easy way to meet people with whom you have something in common; for everybody else, it can have a lot of value in difficult circumstances like a pandemic/isolation period or just in normal situations to meet new people virtually or offline interaction in real life outside work. Also, having connections to different colleagues in the business helped us a few times with getting information or people to reach out to.
For all the employees out there: this is a great way of meeting new people with similar passions, life values, etc — the company pre-vetted them for you 🙂

Our Employee Resource Groups (ERGs) are a powerful tool for promoting inclusion and diversity within Glovo. The ERG “Abilities @ Glovo” provides a space for employees with disabilities - and allies - to connect, advocate for change, create awareness and serve as a valuable partner for feedback on how to better support and accommodate the community. Learn how they are positively impacting on creating a more inclusive and equitable workplace.

At Glovo, the main goal of our onboarding is to make you feel more connected to the company and its values as well as our ways of working. In our best efforts to avoid confusion, frustration, and a lack of engagement, we revamped our Onboarding experience, elevating the bar to meet the expectations of our new colleagues.

Read More
Culture
Culture Day at Glovo: Living up to our values

On Culture Day, we all come together as a company to foster our culture, to celebrate our successes and our people, and to uplift our team spirit. For one afternoon, everyone at Glovo tunes into a series of talks and discussions where we learn more about the business and industry as well as our vision, strategy, people, and culture.